The power of the advertising industry in Mexico

Advertising has become an inescapable element of everyday life; if before the media were the door to connect the individual with the distant outside, that is, with everything that had no place or interest in the individual, today these same media have become the entrance to the lives of individuals and families, which has been and continues to be exploited by advertising.

That is why this ‘art’ has acquired value not only in the economic sphere, but in the academy, which has tried to analyze it, define it and above all question it. However, as Carola García (2014) affirms, the most abundant bibliography on advertising has a technical and pragmatic nature emanating from the sector itself, that is, from those who have used recipes to fulfill one of the many functions of advertising: economic .

In fact, Dr. Carola García Calderón (2014: 25) identifies this theoretical gap since: “advertising has not been studied in itself from a sociological perspective, there is no bibliography that specifically addresses it at a theoretical level from this discipline” .

For this reason, the contribution of The power of the advertising industry in Mexico becomes relevant at the research level since it constitutes a theoretical reference from the disciplinary field of Sociology to analyze advertising from two levels of analysis, namely: the frame and micro.

At the macro level, three theoretical-conceptual bases can be glimpsed that the author interrelates to identify advertising in the Mexican context, which can be seen in the following figure. 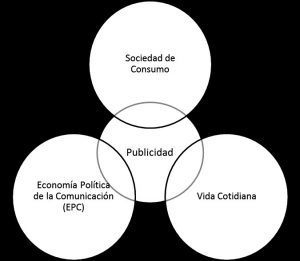 On the one hand, the Political Economy of Communication (EPC) serves as a basis to establish not only the critical line of the Frankfurt School, but also to make clear the validity of Marxist thought applied to the media since this body theoretical-methodological allows the “study of social relations, particularly power relations, which mutually constitute the production, distribution and consumption of resources” (Mosco, 2006: 48) which in this case have to do not only with advertising, but those who produce and reproduce it in the capitalist system as one more lever of accumulation.

It is advertising, which manifests itself through the advertising agencies that have established themselves as a nascent and thriving industry at the transnational level that with the passage of time intervenes to a greater extent not only in the media, but also in politics through (non) regulation, as in the case of the Advertising Self-regulation Code for Food and Non-Alcoholic Beverages aimed at the Children’s Public (PABI), which is analyzed in the last chapter of the book.

On the other hand, daily life is found as the place where information is extracted from the interactions that build it to transform it and reinsert it into this social space through the persuasion of advertising.

In this sphere, stereotypes are developed, habits are created or modified; the lifestyles of modernity are assumed or transformed. It is perhaps here that advertising has the greatest effect.

Finally, the case of the consumer society has an unavoidable value as its effect stimulates capitalism. It is in this process of commodification where the level of micro analysis carried out in the book by Dr. Carola García is found, since it identifies and theorizes two of the values ​​that are inserted in advertising, although they had been considered within this construction process categorial.

According to Jean Baudrillard (2011), there are four types of values ​​found in the goods of today’s society:

The first two were identified by Karl Marx in his book Capital, while the other two have been developed through (post) modernity and the process of post-industrial society, since production is no longer the driving axis. of society, to make way for consumption.

It is this new field where it is theorized; no longer in its pragmatic sense, but it also addresses the theoretical conceptualization of the concept of advertising in all its values, which can be seen in the following figure. 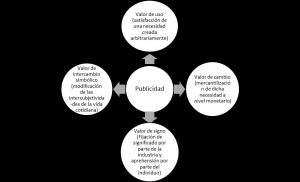 Source: self made
The research presented in this book represents a contribution from the academic field, particularly from the social sciences, to understand the effect of advertising in a country that faces a set of interests that are expressly imposed through the exercise of advertising in social and communicative matters, as well as implicitly through the industries that produce and reproduce it.
For all of the above, this work integrates the two levels through a critical and analytical discourse in the face of a fact that affects both the subject and the group of a society that is increasingly integrated into a globalizing process, as is the case of Mexico in Particular, but that can be a basis for the analysis of this process and product in Latin America, for students of Communication in particular, and of Social Sciences in general.
Finally, the book can be purchased at the Faculty of Political and Social Sciences of the National Autonomous University of Mexico (UNAM), or at the Porrúa bookstores nationwide.