This study compiles and analyzes the state of the question about the tabloidization and the spectacularization of the media, with special emphasis on those theoretical, empirical and epistemological contributions on the impact of the tabloidized journalistic exercise in the consumer society. A screening was carried out based on criteria, descriptors and keywords in the main international databases (JCR and Scopus) using the boolean AND / OR algorithms, from which 52 publications emerged in the Core Collection of the Web of Science and 72 in Scopus. The result of the critical review of the literature shows that the formation of mercantile industries as a mechanism of exercise of corporate and political power, coupled with the erroneous habits of informative consumption of the audiences, promote infotainment, genre that is based on banalized information and sensationalism as a bait to increase the ratings of audiences.

Based on the systematic review of the emerging scientific literature in the main international reference databases (JCR and Scopus), this article aims to analyze the phenomenon of tabloidization and the spectacularization of the media, proposing a conceptual discussion and empirical approaches to the impact of tabloidization on society. Through the analysis of recent periodicals, the reflections on the incidence of tabloidization are systematized until the final consideration, which highlights a contemporary holistic definition of media tabloidization.

For this, it begins with a search systematization in the databases in reference, from the main descriptors in English and Spanish “tabloidization” and “tabloidization” by topic, that is, the inclusion of the term in the title, abstract and keywords. Likewise, in order to define and centralize the search criteria, the terms are incorporated under the Boolean AND algorithm, triangulated with the criteria “media” OR “media”, “infotainment” OR “infotainment”, limiting the results to publications of the Core Collection (Web of Science) and the general base of Scopus. From this first screen, 55 publications are obtained in the WoS and 72 in Scopus –127 in total–, as shown in Figure 1.

Figure 1. Emerging publications * in Web of Science and Scopus on tabloidization **

Regarding the scientific interest in the above mentioned topic, most of the research (f≥2) comes from publications of the first levels of the referred indexations (see table 1).

Graphic 1. Title of the publications with the greatest interest (f≥2) in the subject of tabloidization. 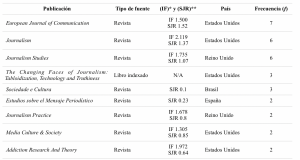 Once the effective Sample (Me = 97) has been obtained, a critical review of the literature is carried out under a mapping matrix, in which it is a priori differentiated whether the publication is an empirical or a conceptual, analytical or essayistic study. The table or matrix of exploration serves to systematize the empirical, theoretical or epistemological contributions, with the aim of interrelating the proposals and results, integrating concepts to carry out a study of the state of the question (Hernández-Sampieri, Fernández- Collado and Baptista-Lucio , 2014).

Having made a critical / analytical reading of the 97 publications that make up the Me and organized the compilation of contributions in the exploration matrix, a total of 59 items were rejected, either because they do not directly belong to the subject matter in focus and scope, or either because they are reviews, presentations or essays whose contribution is not suitable and pertinent for the analysis of the state of the question. Thus, this contentive review remains for 38 scientific contributions.

Initially, the term tabloidization (tabloidization) will be analyzed in the historical and current framework that specialists coined about the dubious action in the treatment of information that circulates through conventional and digital means of communication. Consequently, the theoretical and epistemological discussion of the initial concept and the sum of contributions in its definition that will nurture the concept in contemporary times – from its cataloging at the end of the last century – are examined, as well as the gathering of various elements such as banality and standardized Manichaeism in journalistic information.

Subsequently, in this state of affairs, the debate on the “tabloidized” information merchant industry, exploited by companies, corporations and political powers in the countries of the world, through the multilevel channels of information flow, will be highlighted. as well as some previous studies of tabloidization of information in the world, based on sensationalism about life and death in human tragedies, about the news show with a yellowish, red or pink chronicle charge, to later refer to the format of “media infotainment”.

In this regard, the exercise of democratic freedoms that is used by the tabloidization industry stands out, positions are confronted between the State, the public and information entrepreneurs, as well as journalists in ethical regulation and self-regulation. To cite an example, in Brazil (Nascimento, 2011) to the extent that journalism is interpreted as the professional exercise of freedom of expression / information (characteristic of a democratic regime), the legitimacy of such a credential is dissolved. The relationship between technique and the professional ethos through “credentialing” is seen as undemocratic in journalism. Thus, the process of professionalization – taking the discursive disputes around the borders of the profession – “takes more political than technical contours” (Nascimento, 2011, p. 149). The reason for tabloidization is discussed and extended at both levels, both political and technical, in the exercise of journalism.

Subsequently, it affects the treatment of tabloidized information in the media, how the news is configured, how the audiences receive the manipulated information and what is the interpretative level; what is the impact of sensationalized information on human values ​​and principles. Likewise, it will be investigated which formats are used to convey the tabloid content.